This section describes the carbon-cycle climate module - Hector - that is available for use in GCAM. MAGICC5.3 (Wigley, 2008) has traditionally been the only climate module available in GCAM. Hector v2.0 is the default climate model (Hartin et al., 2015) within GCAM. Users still have the option of running MAGICC5.3 in GCAM5.1, however, we will not be supporting this option going forward.

There most notable change between Hector v1.1 and Hector v2.0 is the inclusion of a one-dimensional ocean heat diffusion model - DOECLIM (Kriegler, 2005; Tanaka and Kriegler, 2007). With this addition, Hector v2.0 exhibits improved vertical ocean heat uptake, as well as surface response to radiative forcing. (https://github.com/JGCRI/hector/pull/206) https://github.com/JGCRI/hector/releases 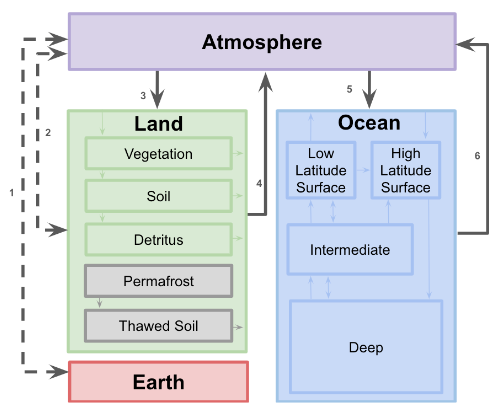 Figure 1: Representation of Hector’s carbon cycle, land, atmosphere, and ocean. The atmosphere consists of one well-mixed box. The ocean consists of four boxes, with advection and water mass exchange simulating thermohaline circulation. At steady state, the high-latitude surface ocean takes up carbon from the atmosphere, while the low-latitude surface ocean off-gases carbon to the atmosphere. The land consists of a user-defined number of biomes or regions for vegetation, detritus and soil. At steady state the vegetation takes up carbon from the atmosphere while the detritus and soil release carbon back into the atmosphere. The earth pool is continually debited with each time step to act as a mass balance check on the carbon system.

Currently the GCAM sectors interact with Hector via their emissions. At every time step, emissions from GCAM are passed to Hector. Hector converts these emissions to concentrations when necessary, and calculates the associated radiative forcing, as well as the response of the climate system (e.g., temperature, carbon-fluxes, etc.)

Table 1: Emissions and sources from each sector passed to Hector.

Land carbon pools change as a result of NPP, RH and land-use change fluxes, whose effects are partiioned among the carbon pools (Hartin et al., 2015).

Getting and Installing Hector for Use with GCAM

For users who are running GCAM with the Mac or Windows Release Package, Hector support is already compiled in. For users compiling from source or interested in getting the Hector source, please see the Hector section in How to Set Up and Build GCAM.