GCAM projects emissions of a suite of greenhouse gases (GHGs) and air pollutants:

Future emissions are determined by the evolution of drivers (such as energy consumption, land-use, and population) and technology mix. How this is represented in GCAM varies by emission type.

GCAM can be considered as a process model for CO2 emissions and reductions. CO2 emissions change over time as fuel consumption in GCAM endogenously changes. Application of Carbon Capture and Storage (CCS) is explicitly considered as separate technological options for a number of processes, such as electricity generation and fertilizer manufacturing. The GCAM, in effect, produces a Marginal Abatement Curve for CO2 as a carbon-price is applied within the model.

CO2 emissions from limestone used in cement production are also estimated. Limestone consumption has one global emissions factor, however, each region’s IO coefficient (limestone / cement) is calibrated to return CDIAC estimates (CDIAC 2017). (CO2 from fuel consumed in producing limestone is estimated in the same manner as other fuel consumption.)

CO2 emissions from gas flaring are not currently included in GCAM.

When land is converted to forests, the vegetation carbon content of that new forest land exponentially approaches an exogenously-specified, region-dependent value in order to represent the finite time required for forests to grow, as shown in the figure below. 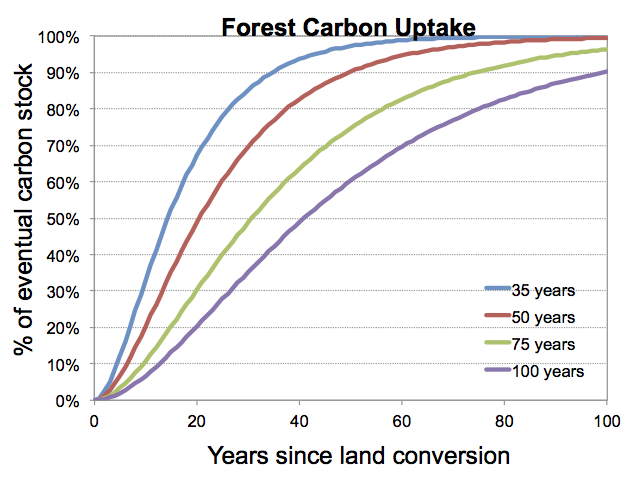 Changes in the carbon content of soils due to land-use change also exponentially approach an equilibrium value using a region-dependent timescale. This represents the timescales for carbon pool changes in soils.

Non-CO2 emissions, both GHGs & air pollutants, originate from many sources and can be controlled using multiple abatement technologies. Modeling non-CO2 abatement at the process level would require too much detail for the scales at which GCAM operates. We, therefore, use parameterized functions for future emissions controls (for air pollutants) and Marginal Abatement Cost (MAC) curves (for GHGs) to change emission factors over time. The emissions controls, which reduce emissions factors as a function of per-capita GDP in each region and time period, are based on the general understanding that pollutant control technologies are deployed as incomes rise (e.g., Smith et al. 2005, although the functional form used in GCAM 5 is different than that in this reference). The MAC curves for GHGs are mapped directly to GCAM’s technologies from the EPA’s 2013 report on non-CO2 greenhouse gas mitigation (EPA 2013).

Note that technology shifts still play a role, since emission factors can differ between technologies.

There are some naming conventions for a few emission species/sectors within GCAM that are useful to note.

The non-CO2 greenhouse gases include methane (CH4), nitrous oxide (N2O) and fluorinated gases. These emissions, E, are modeled for any given technology in time period t as:

Non-CO2 GHG emissions are proportional to the activity except for any reductions in emission intensity due to the MAC curve. As noted above, the MAC curves are assigned to a wide variety of technologies, mapped directly from EPA 2013. Under a carbon policy, emissions are reduced by an amount determined by the MAC curve.

The default set-up is that MAC curves use the scenario’s carbon price (if any). The non-CO2 GHG MACs are an exogenous input, and are read in as the percent of emissions abated as a function of the emissions prices. Note that they are read in with explicit cost points (i.e., piece-wise linear form), with no underlying equation describing the percentage of abatement as a function of the carbon price.

Below-zero (i.e. “no cost”) MAC mitigation (e.g. MAC reduction percentage is > 0 at zero carbon price) are applied in the reference case and phased in over several decades. (This can be turned off by setting the no-zero-cost-reductions option to 1 within a MAC curve.)

Note that a species-specific emissions market can also be specified using advanced options, described below.

Most fluorinated gas emissions are linked either to the industrial sector as a whole (e.g., semiconductor-related F-gas emissions are driven by growth in the “industry” sector), or population and GDP (e.g., fire extinguishers). As those drivers change, emissions will change. Additionally, we include abatement options based on EPA MAC curves.

Air pollutant emissions such as sulfur dioxide (SOs) and nitrogen oxides (NOx) are modeled as:

where EmCtrl is a function that represents decreasing emissions intensity as per-capita income increases:

where pcGDP stands for the per-capita GDP, and steepness is an exogenous constant, specific to each technology and pollutant species, that governs the degree to which changes in per-capita GDP will be translated to emissions controls. The purpose here is to capture the general global trend of increasing pollutant controls over time, but does not capture regional and technological heterogeneity.

For information on using markets for non-CO2 emissions see the markets For non-CO2 section of the polices page.

Emission objects can be added/changed via user input in any time period. New parameters (such as emission factors) overwrite any previous values. Note that emission control objects will be copied forward. For vintaged technologies (e.g. electric generation, road transport), any new emission object will be applied to new vintages. Old vintages will retain the previously read-in emission characteristics.

This also means that GHG objects can be removed or overwritten after a given year by reading in a new GHG object for that gas. This also applies to GHG control objects. Reading in a new control object, for example, in 2020 for an electric generation technology will negate the effect of a previously read in control object of the same name for that vintage and future vintages. This can, for example, represent a transition from some emissions control regime applied to older vintages to a regime defined by new source performance standards.