This document provides information on running and using a pre-existing GCAM model set-up including a model executable. For instructions on compiling GCAM see GCAM Compile Instructions.

This user’s guide is divided into two parts. First a GCAM “quickstart” guide with basic instructions on running GCAM and viewing results, followed by a more detailed GCAM User’s Guide.

This section provides a brief introduction on how to use the GCAM Model and view model data using the GCAM model interface. The instructions in this Quickstart guide should work with a GCAM distribution release that has been downloaded and uncompressed to your local machine.

GCAM requires a valid configuration.xml file be present in the exe directory of the GCAM workspace. You can run a reference scenario by copying the configuration_ref.xml that is provided in the distribution and renaming it to configuration.xml. Note that a log_conf.xml file is also necessary, but this should already be present in the exe directory. The configuration file is descried in more detail in the User’s Guide section, and should not need to be modified in order to run a reference case scenario. The User’s Guide describes how to create additional scenarios.

In order to run GCAM double click on the executable or run the executable from the command line. You should see log messages scroll up the screen as GCAM reads in xml files and begins solving each model period. Log information for each run can be found in exe/logs/main_log.txt.

After a successful model run the log file will end with the following text (depending on your set-up and platform, you might also see this on your screen):

Comprehensive model output from each scenario is stored in an XML database. (Note that the current BaseX database is not comparable with versions of GCAM and the GCAM model interface that use the .dbxml format.)

To view model output open the ModelInterface application. This multi-platform application is written in java and requires that java be installed on your machine. 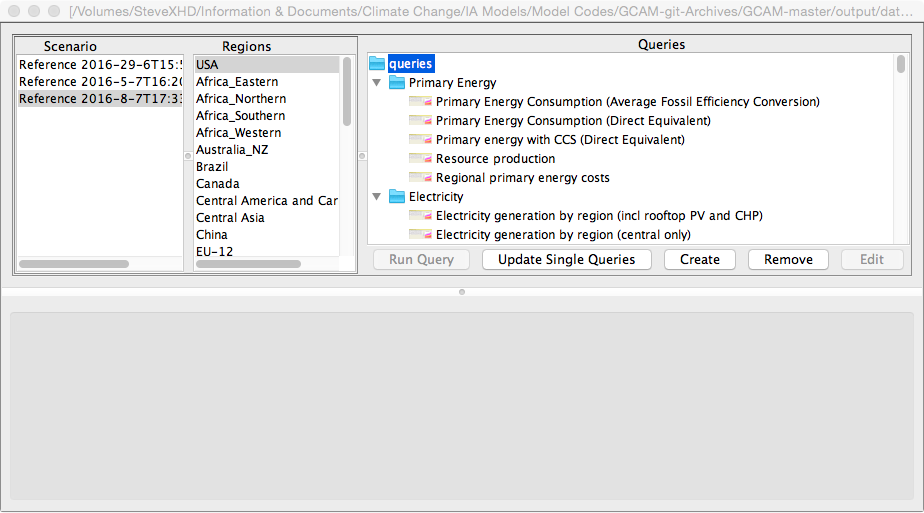 Figure UG-1: Screenshot of GCAM ModelInterface after an XML database has been opened, but before any queries have been run.

To view data select one or more scenarios, one or more regions, and one or more queries. The “Run Query” button will become available once one of each of these elements has been selected. Press this button and model output will appear as shown below: 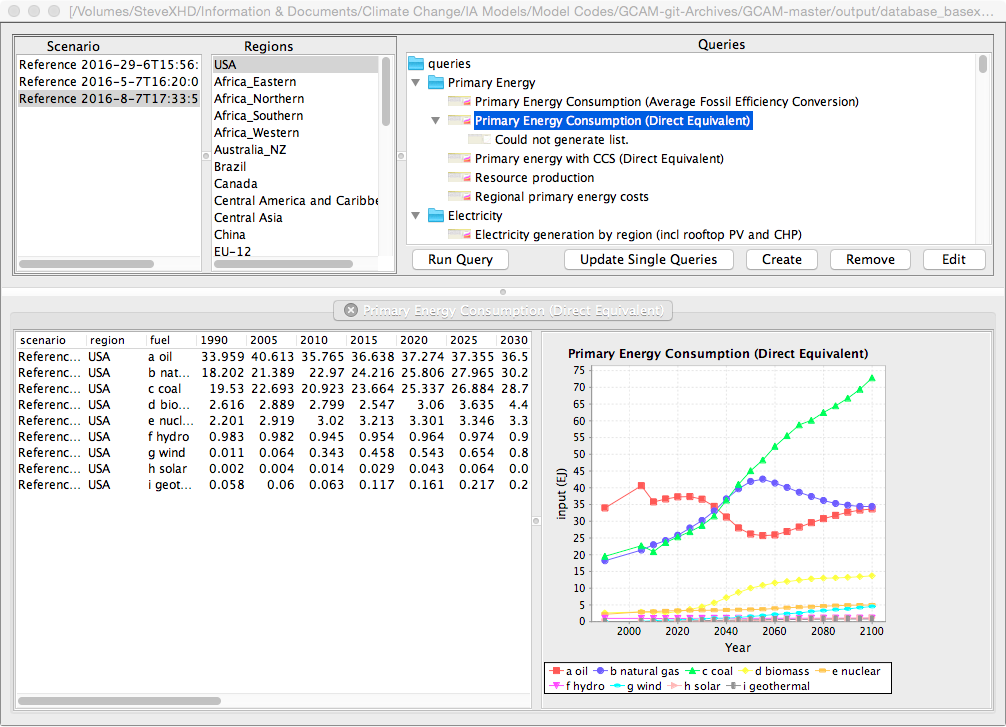 Figure UG-2: Screenshot of GCAM ModelInterface after a query has been run.

Sorting: You can sort results in the Model Interface tables by clicking on the table heading. You can add secondary sorting by holding ctrl while click another column heading.

Copying Data: You can copy the table to Excel by selecting copy from the file menu and pasting it to a worksheet. Column labels will not copy. An output table can also be directly dragged to an Excel worksheet by clicking on the output tab and dragging to an open Excel worksheet. Graphs will not be copied, only data.

The configuration_ref.xml file distributed with GCAM contains the list of input files that define the reference scenario for that GCAM release. Do not modify any of the original scenario component files. If you wish to make a change, make a copy of the file and modify the copy.

The following table summarizes the options available under the <Files> section of the configuration file. Note that for output files the write-output attribute is used to enable/disable output. The append-scenario-name attribute can be used to instruct GCAM to append the scenario name to the specified filename. See configuration_ref.xml for examples.

The following table summarizes the options available under the <Strings> section of the configuration file. These options should be strings, specified without quotes.

The following table summarizes the options available under the <Bools> section of the configuration file. These values should be specified as either 1 or 0.

The following table summarizes the options available under the <Ints> section of the configuration file. These values should be specified as integers.

If running multiple scenarios, GCAM can also be run in Batch mode, in which a batch input file contains user-specified sets of add-on components that can be used to define multiple scenarios, which will then will all be run. In order to run in batch mode the BatchMode bool(ean) setting in the configuration file must be set to 1, and a batch input file must be specified as BatchFileName under <Files>.

The Batch file has the following format:

If there are multiple ComponentSet blocks, then all permutations of FileSets within each ComponentSet will be run.

Note that there is also a batch functionality within the ModelInterface, which has a different format.

Enabling this mode for running GCAM involves specifying a policy target file and enabaling find-path. When run in this mode GCAM will run a scenario several times to find the optimal path to satisfy the configured climate goal. Running GCAM in such a mode can take quite a bit of time, one option to speed this up is to set restart-period to 22 in the configuration file as noted above. Example policy target files are supplied in input/policy and are self documented:

Note that target finder runs can also be configured in Batch mode. In this case you should leave the find-path bool to 0. Note the policy-target-file are specified in their own section, and <single-scenario-runner /> indicates to run a permutation with no target finding, e.g. the reference scenario:

The model interface is a GCAM tool to view GCAM results from the BaseX XML database or convert CSV files to XML. You may find a copy at the top level of your release package and can be run by double clicking the ModelInterface.jar (on Mac this will be ModelInterface.app). This section will focus mainly on viewing results. It can be used in an interactive mode or users can set up batch query files to automate dumping results to CSV or XLS.

Please see the Quick Start section for the basics on how to open an database and run queries. The Scenarios and Regions sections get populated automatically from the GCAM results that are stored in the database. The Queries are loaded from a query file. You can check the model_interface.properties file which is located in the folder as the ModelInterface.jar:

Each query is represented in it’s own XML syntax such as:

This XML can be copied directly out of the ModelInterface by using Ctrl-C (or CMD-C on Mac) and pasted back into the Model Interface or as text elsewhere such as email. Similarly the XML text can be copied out of an email and pasted back into the Model Interface using Ctrl-V (or CMD-V on Mac). This is a handy short cut for sharing or editing queries. You will notice when queries are modified a * appears at the root of the qeries. You can choose to File -> Save to update the underlying query file or use File -> Save As to save and switch to a new query file.

When doing scenario analysis on GCAM results it is often very useful to predefine the set of queries you would like to look at and automatically save the results to CSV or XLS format for plotting or making tables, etc. Setting up the Model Interface to do this is done in one or two steps depending on the level of automation you would like.

First you must set up a “batch query” file. An example of such a file can be found in output/gcam_diagnostics/batch_queries/Model_verification_queries.xml. The idea of such a file is you list the quries you would like to run one after the other and for each query you include the regions (which can be any of the ones listed in the Regions section of the GUI) you would like to query.

The actual queries are of the same format as described above and can be copied out of a query file or pasted from the Model Interface.

Users can run this “batch query” file from an interactive Model Interface session by selecting File -> Batch File and selecting the “batch query” file they wish to run. Users are then asked where to save the results (.csv saves as CSV and .xls saves to excel) and which scenarios to run.

Alternatively if users prefer to set up a workflow that does not require any manual user interaction they may prefer to set up a “batch command” file as well. An example of such a file can be found at output/gcam_diagnostics/batch_queries/xmldb_batch.xml:

Users can the invoke the Model Interface from the command line to call their batch file and no user interface will be presented: