This section is for users that wish to compile GCAM C++ source code into an executable. Note most users can just use the executables provided in the release package as most scenario modifications are done by changing XML input files. Users may need to re-compile the C++ source code for reasons such as:

This section details where to get and how to build the additional software required to re-compile and run GCAM. In addition some notes beyond those provided by the source as it pertains to GCAM. All of these required software are open source and/or available free of charge. Note: Mac and Windows Release packages will already include these libraries and users only need to follow these instuctions if they have a specific need to rebuid them.

Boost includes many general purpose utilities for the C++ language and helps GCAM compile correctly accross most platforms. The library can be downloaded from Boost. The version released with GCAM was 1.51 however any recent version should work. Only the header files are necessary. The Xcode and Visual Studio project files will expect them to be located in <Release Package>/Main_User_Workspace/libs and where the folder unziped after downloading boost_1_51_0 is either renamed or symlinked to boost-lib. When building using the Makefile they can be located anywhere and are referenced by setting an environment variable.

We use the Xerces C++ XML parser for reading in XML, the format in which all GCAM inputs and configurations are specified in. The library can be downloaded from Apache, the C++ version is the one to get. The version released with GCAM was 3.1.1 but any recent version should work. Once you expand the xerces zip or tar file, you can find detailed installation instructions for building and installing the library in doc/html/index.html. You can follow the instructions there appropriate for your platform.

GCAM requires the 64-bit version of the library to be built. This means you should change the build configuration to Release and the Solution Platform to x64 when building the library. Only the core library is needed, the command line tools and tests are not necessary. Once built you can copy (or symlink using mklink /D, note administrative privledges may be required to run this command) the build artifacts to where the Visual Studio project file is expecting them:

GCAM requires the 64-bit version of the library to be built. In addition users have had trouble linking with the cURL library which isn’t necessary for running GCAM so you could disable that. The follow could be used as a template for building the library:

With these variables set, you can configure and build xerces as follows:

After installing xerces, you can optionally delete all the intermediate files that were generated during the xerces build by running:

Java is required by GCAM in order to store results in a BaseX XML database, which itself is written in Java. GCAM will use the Java Native Interface to interact with the database. Since BaseX is written in Java it is inherently cross platform thus building it is not discussed here. GCAM uses version 7.9 of the BaseX library, which is the last version which still supports Java 1.6. GCAM, therefore requires Java version 1.6 or newer. The official Oracle version or the open source version should work (both are free to install). Some additional notes:

GCAM can be configured to compile without Java support, doing so implies GCAM results are not written to the BaseX database. To disable Java edit <Release Package>/Main_User_Workspace/cvs/objects/util/base/include/definitions.h and set __HAVE_JAVA__ to 0:

Note that even if you turn off Java support you can still have GCAM generate the XML document that would have been inserted into the database by editing <Release Package>/Main_User_Workspace/cvs/objects/reporting/source/xml_db_outputter.cpp and set DEBUG_XML_DB to 1:

Which can subsequently be loaded into an XML database by using the Model Interface by opening a database, choosing File -> Manage DB, then Click Add, finally select the debug_db.xml document to add to the database. Note a new database can be created by simply selecting an empty folder to open as a database (you will see a warning message about potentially deleting files and you should pay attention to it).

On Windows users can get by with just installing the Standard Runtime Environment (JRE) for running GCAM however when building the Java Development Kit (JDK) is reccommended. GCAM will expect the following header and lib files within <Release Package>/Main_User_Workspace/libs:

Which can be placed there by copying or symlinking:

In addtion the PATH variable may need to be updated so that GCAM can find the jvm.dll. Note that this is the purpose of the <Release Package>/Main_User_Workspace/exe/run-gcam.bat wrapper. Users can take a look at this file to understand how GCAM detects the JAVA_HOME and updates the PATH accordingly.

Java on the Mac is complicated by Apple’s custom Java installation and subsequent removal of said Java since OSX 10.10+. The Apple version is only up to the now ancient Java version 1.6. It can still be installed on newer version of OS X with an explict download. All versions of OS X can still use a more recent version of Java from Oracle/openJDK instead (note users must install the JDK, not the JRE). Even if users on OS X 10.10+ install the Oracle/openJDK version of Java they may still be prompted to install the old Apple JDK when running GCAM or the Model Interface. Note the purpose of the <Release Package>/Main_User_Workspace/exe/run-gcam.command wrapper is partially to detect and work around some of these issues. For users that are being asked to install the old Apple JDK even if the newer version is installed they can try the following in Terminal to resolve the issue:

And add the following JVMCapabilities:

Users who want to use the Xcode build environment will need to set up in the <Release Package>/Main_User_Workspace/libs the include and lib directories. For users using the old Apple JDK the run-gcam.command will copy into place a stub library to appropriately call the Apple JavaVM.framework (TODO: where to find the include). For users using the Oracle/openJDK Java they will need to create the following symlinks:

Please use the appropriate methods on your platform for installing Java. Please see the Compiling with Makefile for how to set environment variables so that your Java installation is found by GCAM.

Once users have gotten the additional third party libraries installed they can proceed to compile the GCAM source code. GCAM strives to use standard C++ capabilities where possible and use Boost to work around dificiencies otherwise. As such, GCAM has been successfully compiled with GCC, Visual Studio, Clang, Intel, and Portland. That being said we only actively test GCC, Visual Studio, and Clang. In addition we provide a Unix Makefile, Xcode project file, and a Visual Studo project file for compiling.

Users on POSIX systems can use the generic Makefiles to build GCAM on their system. In addition Mac users who do not wish to install/use Xcode can also use these (they will still have to install the Apple Command line tools at a minimum). Windows users have also had success using the Makefiles under cygwin however some modification was necessary and is beyond the scope of this document.

The core of the Makefile configuration is located under <Release Package>/Main_User_Workspace/cvs/objects/build/linux/configure.gcam however typically users simply set the following environment variables (with values set appropriately for their system):

With these environment variables set a user can simple run:

Note the -j 8 is simply to compile multiple sources files at a time and is only necessary to speed up the processes. Once complete an executable will be copied to <Release Package>/Main_User_Workspace/exe and can be run from that directory with gcam.exe -Ccofig_file.xml.

Mac users who would like to use the Xcode integrated development environment must have it installed (available from the Apple App Store), any version 3.2+ will work. Users can find the project file under <Release Package>/cvs/objects/build/xcode3/objects.xcodeproj. Once open you should change the Scheme to build the Release target. You can find the scheme settings here:

Then under the Info tab change the build configuration to Release: 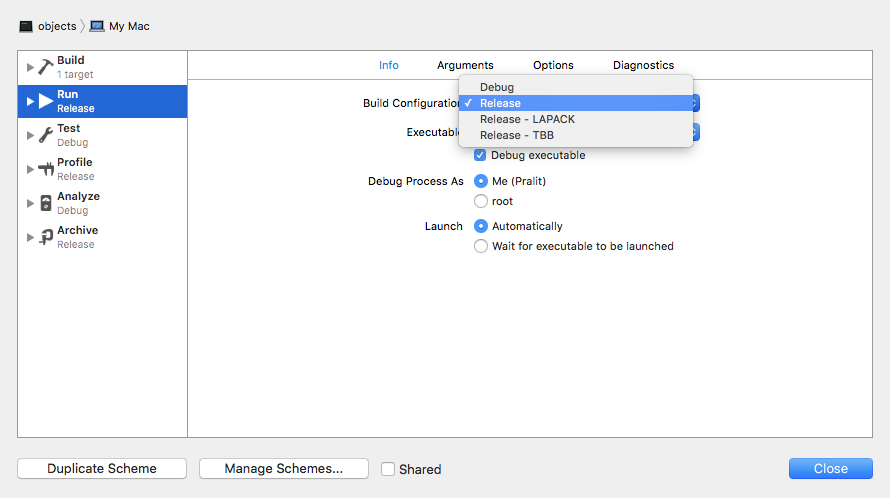 Finally selcet menu option Product -> Build to build GCAM. Once complete an executable will be copied to <Release Package>/Main_User_Workspace/exe and you can still use run-gcam.command to run it. Note that to run GCAM from within Xcode, you must set the working directory to the exe directory within your workspace. This is done within the Options section of the current scheme.

Users will need to have Microsoft Visual Studio C++ compiler installed (usually called for Windows Desktop). Any version 2010+ will work as the 64-bit C++ compiler is required. Note Microsoft does provide a free option called “Express”. Users can find the project file under <Release Package>/cvs/objects/build/vc10/objects.vcxproj. Once open you should change the Solution Configurations and Solution Platform to Release and x64:

Also you will likely have to change the Platform Toolset under menu Project -> objects-main Properties.. to the latest toolset installed with your Visual Studio. Note that to run GCAM from within Visual Studio, you must also set the working directory to the exe directory within your workspace and update the PATH environment variable to find jvm.dll. This is done within the same project properties dialog under the Debugging section and properties Working Directory and Environment. 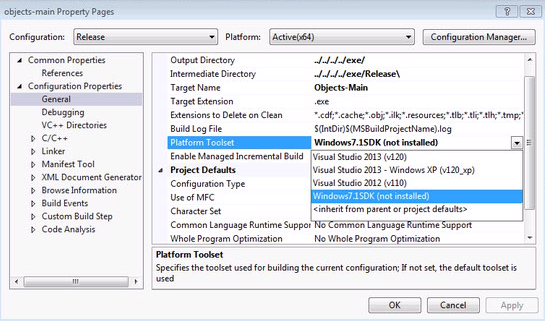 Finally select menu option Build -> Build Solution to build GCAM. Once complete an executable will be copied to <Release Package>/Main_User_Workspace/exe and you can still use run-gcam.bat to run it.